Look back on first week of production for Fat Kid Rules The World! 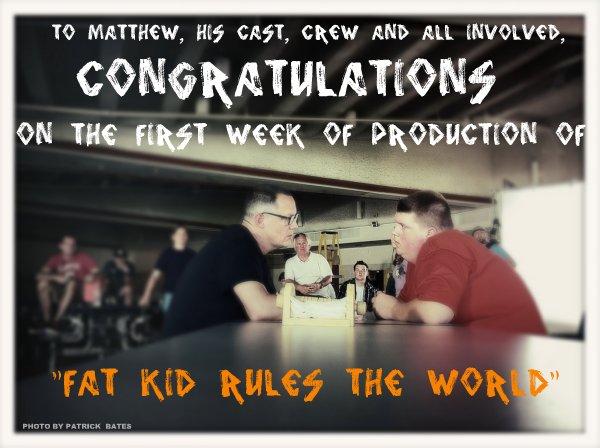 Wow, it’s been a busy, busy week for Seattle! Let’s look back on their first week of production.

The cast had their full table read last week, Jacob Wysocki had an improv comedy show in Washington on Saturday night that Matthew was also going to be on stage for, but he had to fly to L.A for a callback.
Audience members say that Jacob rocked, which is not a surprise considering his previous comedy work.

Lili Simmons flew in on Saturday, having a fitting and rehearsal then she tweeted on Fourth of July, saying that the cast and crew had a barbeque party on Sunday which was a lot of fun!

She continues that she had a “great first day off to a good start :)”, saying she was enjoying her time onset.

As production started filming at the school, Fat Kid Rules The World’s facebook page was updated with photographs from the first scenes they shot, as well as Jacob Wysocki getting his hair cut into the buzz cut worn by Troy.
Checking out his hair and beige pants that are the character’s daily wear, Jacob lamented, “I look like Forrest Gump!”
Various extras were excited to take part, tweeting and leaving messages on facebook to tell the cast and crew they had a great time during their three days on set.

One such extra we mentioned earlier, Amara, has become inspired by the film and created a fantastic work of art from a set sketch.

Talking of artwork, Laurie Clark is on set photographing what are sure to become set stills, we are excited at the thought of her photography and the chance of seeing an official production picture of Troy and Marcus!

Jeffrey Doornbos is a producer on From The Head, the film that earlier won Best Feature at Philadelphia’s Independent Film Festival and stars Matthew! Jeffrey is in Seattle, playing Mr Sherman on the set of Fat Kid.
“Chasing truants thru high school highways on the set of Fat Kid Rules The World. Why do I feel typecast?”
Jeffrey says that Matthew is a natural at the helm and gets the best out of his actors, continuing on twitter, “cast and crew is outstanding and I got to act with 100+ local high schoolers, they were awesome! Go Eagles!”

Annabeth Gish (Matthew’s SLC Punk and Home Run Derby costar) tweeted her support for Matthew and the movie, “How’s it going, bossman? Good luck, know you are killing it Mattie!” as well as Julie O’Hora, the screenwriter for Matthew’s film American Summer. Julie had this to say, “You’ll be an awesome director with your old-soul smarts and huge heart.”

To congratulate Matthew and his production office on their hard work, we sent along flowers and some snacks! Hope you all join us as we look forward to the next few weeks of production on Fat Kid Rules The World!

1 Response to Look back on first week of production for Fat Kid Rules The World!