Matthew took part in a cast Q&A for The Descendants at NYFF! (Video)

There is a brilliant video stream of the Q&A, there are several spoilers regarding Matt’s character in the film, but he had this to say.

“I’ve been gone for a long time [from acting],” Matthew admitted. “And to do the greatest movie that I will maybe ever be involved in – to be a part of that something that’s an instant classic, and to be with one of the greatest filmmakers in America right now? It changes your life. And it changes your perspective on the work and your career and it gives you something to be proud of and that doesn’t happen very often in the business that we’re in right now. To be able to work with this cast and crew and director – it’s a once in a lifetime opportunity.”

Transcript,thanks to Indiewire.com and their writeup.

You can see more of what Matthew, other cast members and Alexander Payne had to say by watching the below video. A real treat to see the whole cast together onstage! 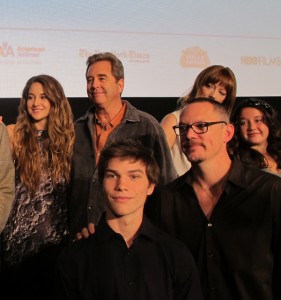 1 Response to Matthew took part in a cast Q&A for The Descendants at NYFF! (Video)