The Bridge airing on FX this week, Matthew to appear at SDCC13!

We’re getting closer and closer to Wednesday’s air date for The Bridge’s first episode as the promotional events increase!
The cast went to Mexico City on Friday to promote the series, meet press and fans, Annabeth tweeted a great photo of Matthew pointing out his promotional poster and Matthew also posted a fun one showing some love to his character!

Quien.com posted some great pictures of the cast on the red carpet for their Mexico City press launch. 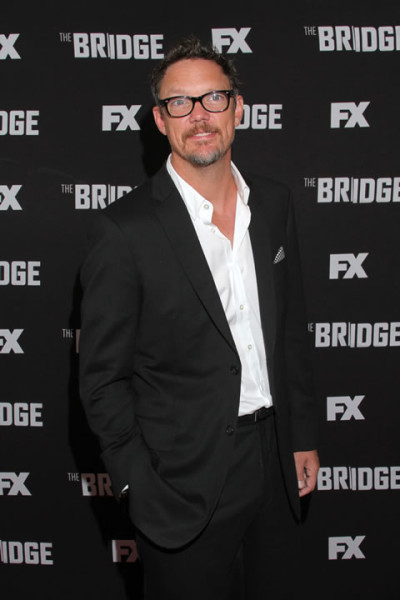 This brilliant article was posted online where the original inspiration, Ariana M. Chavez for the female journalist on the show, portrayed by Emily Rios. It is a fascinating read as she details how she helps the producers with their questions, research and how to accurately depict a newspaper office! Read to see what the cast members she meets have to say about the show.

We hope you like our new layout that we have uploaded in honour of the new show starting and we have increased our online presence by creating our own tumblr, so be sure to follow if you want daily Matthew pictures on your feed!

Last but not least, San Diego Comic Con have released their schedule listings for this year’s event and Matthew is scheduled to appear on Sunday! So many fans enjoyed meeting him in 2010 as they promoted Scooby Doo:Mystery Inc series airing. This year, Matthew will be attending as part of a promotional panel for a new Scooby Doo! Adventures: The Mystery Map feature film which will combine the storytelling genre of puppetry with Matthew yet again providing the voice for Shaggy! The movie will premiere, followed by a live appearance from Matthew! Also appearing are Tony Award winner Stephanie D’Abruzzo (Avenue Q), puppetmaster supreme Peter Linz (The Muppets) as well as filmmakers David Rudman (The Muppets) and Adam Rudman (Sesame Street) and Warner Bros. Animation’s Jay Bastian as they reveal their magical visual techniques. Scooby-Doo! Adventures: The Mystery Map will be distributed by Warner Bros. Home Entertainment as a digital download and a Walmart DVD exclusive on July 23. The premiere and panel take play on Sunday July 21, 2013 10:00am – 11:15am in Room 6A.