The Bridge Season 2 news and pre order season 1 on blu-ray or DVD!

We are excited to see The Bridge filming is well underway for the long awaited season 2, with five episodes already in the can! First of all, Congratulations are well deserved for everyone involved with the show as it won a Peabody Award, as “this series is a powerful translation for American audiences, spotlighting issues along the border that are rarely seen on mainstream U.S. television, raising awareness of border issues while creating a compelling murder mystery.”

Matthew is back along with Emily Rios, both as regulars. Everyone’s favourite reporters Daniel and Adriana will be back on the scene along with a slew of new people and characters. Here they all are taking part in a table reading. Photo courtesy of Laura Jean Leal, the writers assistant. 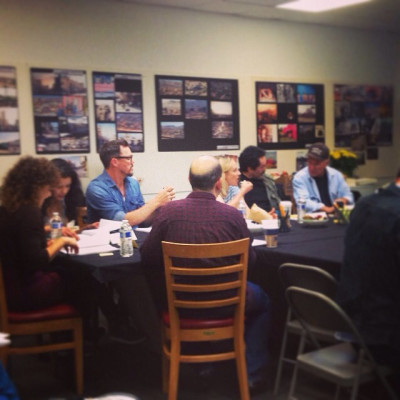 Brian Baumgartner is joining the cast as Daniel’s AA sponsor. Longtime friend and fellow D&D player, Abraham Benrubi is also in the scene, getting acquainted with Johnny Dowers and his remarkably hirsute Super Cooper!

Alex Plank, everyone’s favourite intern is back too, as evidenced by this great photo of Alex and Matthew that he let us share, Thanks Alex! As Alex also consults for the show, (specifically for Diane Kruger’s Sonya )check out his website, Wrong Planet which has been referenced in the show, trivia fans! Can you tell us how?

If you have been missing the remarkable cast of Diane Kruger, Demian Bichir, Ted Levine, Thomas M.Wright, Annabeth Gish, Lyle Lovett, Carlos Pratts and the award winning show, you can pick up season 1 in June! Already out for pre-order, the DVD and blu-ray boxset is released on June 24th.

Be sure to pick it up and venture back over The Bridge before season 2 starts on the FX channel, July 4th at 10pm!

We look forward to hearing more about MATCH as hopefully it will go to other festivals around the world. Paste Magazine had this great mini review as Michael Dunaway rounded up his Tribeca capsule reviews.

The best film I saw at Tribeca this year. The perpetually underrated Matthew Lillard has never been better; he’s alternately inexcusable and irresistible. And Patrick Stewart turns in one of the finest performances of a fine career as well. It still feels a bit like a play on film at times, but if that doesn’t bother you (and why should it?), you’ll be rewarded with a great night.