Setting the twittersphere alight with gossip, Scream 4 fans have been wondering whether Matthew is in Michigan for a Scream 4 cameo, after rumours swirled around that he had been spotted having dinner with Neve Campbell.

The original report was fake, but Matthew has now visited the set and met up with old friends and costars, but confirms he is not taking part in the new Scream 4.

“For the record… NOT in SCREAM 4. Visiting the set and dinner with cast members does NOT equal SCREAM 4. I swear on my eyeballs”

Here at MLOnline, we know Matthew is in Michigan for the filming of Home Run Showdown.  As Scream 4 is filming in Michigan, we were hoping Matthew might visit the set and say hello to his old Scream co-stars, since he has recently said how he stays in touch with Neve.

In Bob Bendick’s Podcast last year, Matthew said how he had visited Neve in London and talked about how he felt about the making of Scream 4.

Bob Bendick -What do you think about the news of Scream 4 being made?

Matthew Lillard: I think it’s good. You know it’s funny I was in London recently, I was talking to Neve, I was like tell Kevin Williamson I’ll come back… I’d love to come back. I think Wes is a genius. I love Wes Craven. I love the entire cast. So if they can make the fourth one exciting and new and fresh, awesome.”

Here are some pictures of Matthew and Neve at the Scream party with Skeet, and when they attended the 70th Annual Academy Awards together in 1998, aw. Hopefully, these will tide you over until the gallery reopens! 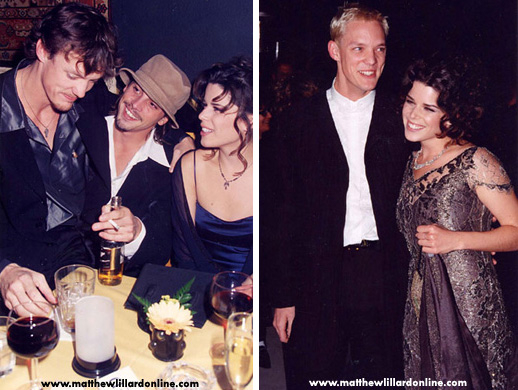