An update on The Descendants and a new project, From The Head.

Alexander Payne has revealed that The Descendants will not be ready until later next year, rather than opening in a limited release, for awards contention, on 18th December and in general release in January as had been expected. This is a shame, but as people who have seen Alexander Payne’s earlier works, such as Sideways know they are worth waiting for!

Here is an excerpt from an online interview with the Omaha World-Herald.

Q. When did post-production work begin in earnest, and when do you hope to complete the film?

A. Post-production began June 14. I predict I’ll be working on it until January or February.

Q. Is my guess correct that you like filming more than post-production?

A. No. I prefer post-production. Editing is where you really make the movie. Everything before is just harvesting footage to tell the story. It’s really all about the editing.

Q. When do you hope to release the movie?

A. That’s up to the studio (Fox Searchlight). Because this film has more adult themes, they might hold it to fall of next year. We haven’t held those conversations yet.

Matthew stars as a lothario, Brian, who has an affair with George Clooney’s wife, who unexpectedly falls into a coma and George Clooney’s character, Matt, sets out with his two daughters to find themselves as they take a road trip to seek Brian in Hawaii and tell him the sad news.

In other project news, Matthew tweeted that he worked on a new independent film earlier this year, long time fans may remember the original short film from youtube, entitled The Lipstick And The Hair where Matthew played a strip club patron.

Written and directed by another Spanish Judges alumni, George Griffith, the feature film, From The Head is about a strip club bathroom attendant, Shoes and a day in his life where he meets many strip club patrons. Matthew reprises his short film role, as Jimmy.

Here is a picture of Matthew on set  with the soundman, Tom Curley. 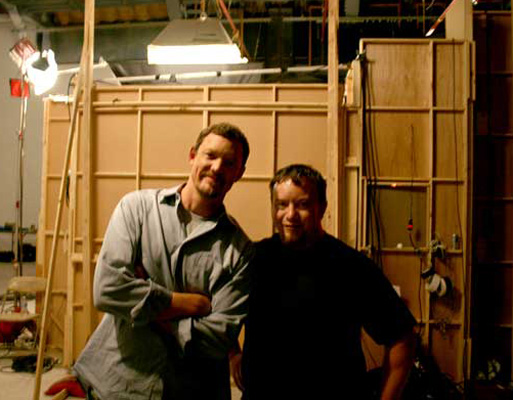 1 Response to An update on The Descendants and a new project, From The Head.