FX pick up The Bridge where Matthew will have a guest starring role! 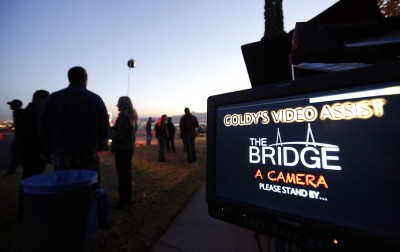 FX have confirmed that they will pick up a 13 episode season of The Bridge.
Starring Diane Kruger and Demian Bichir, the US adaptation of Swedish/Danish Bron tells the story of two mis-matched detectives, Sonya Cross and Marco Ruiz who join forces to solve the murder case of a body found on US and Mexico borders. The pilot was filmed in El Paso, Texas and in Los Angeles, directed by Geraldo Naranjo who helmed the gritty Miss Bala.

Variety were first on the scene to report the greenlighting of The Bridge, noting the calibre of previous crime projects that creator and writers Meredith Stiehm and Elwood Reid have worked on (Cold Case, Homeland and NYPD Blue) and The Hollywood Reporter mentions their guest stars,

The Bridge has enlisted guest stars Ted Levine as a member of Cross’ team, Annabeth Gish, as a wealthy widow with a ranch to run, Thomas M. Wright as a wolf of a man and The Descendants’ Matthew Lillard as a cocky reporter.

HitFX add, “Stiehm and Reid said, “Working with FX has been amazing. The border has so many rich and compelling stories to tell and John Landgraf, Nick Grad and Eric Schrier, along with the Shine America team, are just as excited as we are to bring those stories to life.”

The series will start production in April and will air from July onwards. We are really excited to confirm that Matthew will be guest starring in the pilot as Daniel Frye, the reporter whose previous life choices have affected his career and hopefully will appear in all the episodes. FX look like they’ll have a full house of great television shows to watch this year as Justified is currently airing and Sons of Anarchy returns later this fall! Will you be tuning in?