Win tickets to see Match at the Seattle Gay and Lesbian Film Festival with Matthew in attendance!

Match is having its north west premiere at the Seattle Lesbian and Gay Film Festival, with Stephen Belber the director and Matthew in attendance. We have two tickets to give away which also includes entrance to the Hotel Max reception after the movie. 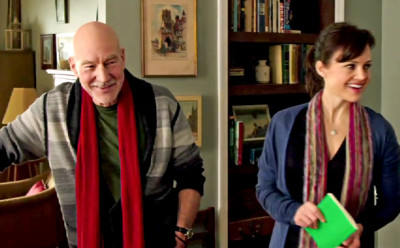 Match features Sir Patrick Stewart as Tobi, a gay ballet teacher, his quiet life is brought into perspective when a young couple from Seattle visit him as the wife portrayed by Carla Gugino is working on her dance thesis. As the couple question Tobi, his wild life in the past is brought to the fore and Tobi begins to question the couples motives.

“Emotions erupt and secrets are revealed—truths none of them want to face. All involved must come to terms with their own choices and the paths they have taken in life in order to move forward.

Brilliantly acted (with a true star turn for Patrick Stewart) and based on the Tony-nominated play, MATCH is a thought-provoking, intense, and brilliant conversation about art, family, and life’s divergent paths.”

Please leave a comment or tweet us on @mattlillardfans to be entered into a giveaway to win two tickets to the screening with entrance to the Centerpiece Reception after. This competition will close tomorrow evening at 8pm Seattle time (PDT) and the winner will be notified by email or social media.